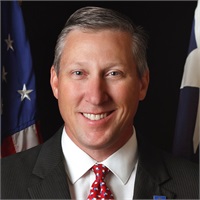 Drew Springer Jr. serves as Senior Director and a financial advisor for the firm. Drew Jr. graduated from the University of North Texas in 1988 and received a Bachelor of Science in Accounting. Prior to joining his father at Springer Financial Services, Drew Jr. spent 15 years at Trinity Industries where he started as a staff accountant, moving up to Division Controller, Vice President of Leasing, And President of three Divisions.  Drew Jr. specializes in money management and client services. He is registered as a Series 7 and 66 broker.

In addition to working with his father, Drew Jr is a Texas State Senator for district 30 which encompasses 14 counties in North Texas and over one million Texans. Drew was sworn in January 2021, prior to that he served in the Texas House for eight years representing 22 rural counties.  During his time in the House he was Chairman of Agriculture and Livestock, served on Ways & Means, State Affairs, Land and Resource Management, County Affairs, and Special committee on Economic Development.

Drew Jr. and his wife Lydia have three children and one grandchild. Drew Jr. is a volunteer firefighter in Muenster, serves on Sacred Heart Catholic Church finance council, and has been a volunteer high school tennis coach.  In 2019, Weatherford High School inducted him into the athletic Hall of Fame for his time on the tennis court.  Drew Jr. played varsity tennis at UNT where he is a member of the UNT Letterman’s Club.